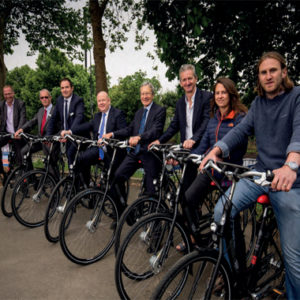 An extremely novel scheme
Great Western Railway and Bainton Bikes have made it
easy for people to hire cycles, simply by using a mobile
phone app. No additional infrastructure at the railway
station is needed, and the user benefits too, as they just
have to access their phone to unlock their bike.

Bainton Bikes have adopted the pioneering app, which
was developed in Copenhagen, but it is the first time
that such a scheme has been used in the UK. It allows
cycles to be booked day and night and collected from
existing cycle racks.

The bike is unlocked using a bluetooth code sent to the
mobile phone. Bikes can be ordered to suit the rider
and, as they use the existing station cycle racks, there is
no need for any specialised parking area. The scheme
means that any station with a cycle hoop can become a
cycle hire outlet.

The cost to Great Western Railway has been very
low and limited to marketing and signing. Bainton
Bikes invested in the development of the app, but
now benefits from the growing market from tourists,
students and commuters coming into Oxford.
This scheme was launched in June, yet already there
have been occasions when all 20 bikes were hired out.
Bainton are already looking at adding more bikes to the
station stock and a further 100 bikes have been ordered
for delivery.

The system is highly replicable and Great Western
Railway are in discussions about the possibility of
operating the scheme at more Cotswold stations, and
possibly Didcot and Henley-on-Thames.

The system has the potential to revolutionise bike hire
schemes at stations, helping customers and giving train
companies an extra option so that they can support
cycle-rail without impacting on space within the train.

Feedback from users so far has been very favourable,
with many commenting on the ease of hiring.
The judges particularly liked the element of fun
combined with efficiency:
“This is actually a fun scheme! In a world of tightened
budgets, particularly in the rail industry, it’s good
to see that this was delivered with no financing
requirement on the train operator. Nice work!”

By continuing to use the site, you agree to the use of cookies. more information